THE NEED TO TREAT SEPARATELY THE matter of archival materials on Mihailo Petrović is informed by the fact the existing materials are scattered and that much of it has never been published. A good starting point for initial acquaintance with extant materials is a collection of manuscripts and books published as a part of the Digital Legacy of Mihailo Petrović Alas, which provides the researcher, casual or academic, with access to scans of the originals, as well as their meta-data. Furthermore, a useful sources of information are catalogues of previous exhibitions on Mihailo Petrović, such as the catalogue of the exhibition organized in the Archive of Serbia in 1968, or the catalogue of the exhibition held at the University Library “Svetozar Marković” in 2003. The best information, however, is provided by Dragan Trifunović, who has dedicated over thirty years to studying the life and work of this Serbian mathematician and whose books and publications are available at the eLibrary of the Faculty of Mathematics.

The guidelines or instructions for archival research attempt to give users an overview of archival, library or museum holdings and collections in certain historiographical contexts, as well as to make research more efficient. These instructions are mostly composed by collection holders, for example, archives, libraries or museums. The following describes the research of archival materials on Petrović from the point of view of one researcher. The focus is on materials held in small, and to the broader academic community unknown, “archives,” such as the archive of the Association Adligat, Foundation “Mihailo Petrović Alas” and the archive of the SASA Mathematical Institute. A review of the materials held by the two state archives: the Archive of the Serbian Academy of Sciences and Arts (SASA) and the Archive of Serbia, is also provided.

The cover page of the catalog for the exhibition organized in the Archive of Serbia, in 1968. 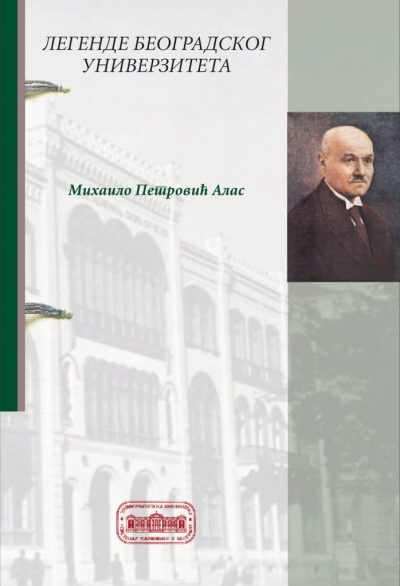 The cover page of the catalog for the exhibition organized in the University Library “Svetozar Marković,” in 2003.

The Association Adligat is a Belgrade-based non-profit NGO which holds several personal and family foundations and collections. This association also holds a part of the legacy of Mihailo Petrović entrusted for safekeeping by a donor whose wish was to remain anonymous to the general public. The materials are held in two cardboard boxes, one large and one smaller, which have not been formally archived, and with currently no records being made of it. However, one should duly note the effort of the archivist of the Association to identify and categorize portions of the material. Upon reviewing this legacy, one can single out the following: letters, personal documents, manuscripts, photographs, maps, fliers, brochures and journalistic puns which concern mostly the period of Petrović’s schooling in France, from 1889, and to the outbreak of World War II in Yugoslavia in 1941. Thematically, it spans Petrović’s schooling, academic career, scientific work, travels and fishing. Since the materials are mostly in Serbian and French, study is impossible without fluency in these two languages. The material in French from the time of his advanced studies in Paris, is particularly rich, and features, in addition to enrollment documents, lecture notes and degrees, also atypical materials such as city maps, public transport tickets, hotel or tailor bills, library receipts etc. The problem encountered by studying these materials is that they are in a very bad condition. Parts of the material had been exposed to humidity and mold, and it is not possible to review it. Therefore it is recommended that this body of material be classified and recorded in the near future, as soon as possible, to ensure conditions for its keeping and recovery, and to subsequently digitalize it and make it accessible to researchers. 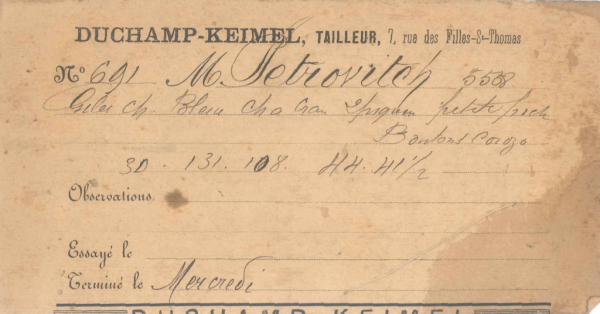 The slip to Petrović’s name, for having a suit made at the tailors’ in Paris, around 1890–1894. (Adligat Society

A part of the legacy of Mihailo Petrović is preserved in Elementary School “Mihailo Petrović Alas” in Belgrade, as a gift by Jovan Hans-Ivanović, the grandson of Petrović’s sister Mara, who now lives in Switzerland. This material is partially showcased in two cabinets in the school’s entrance hall and a part is situated in Petrović’s suitcase in the office of the school principal. In 2010, a school librarian and an editor of the Foundation “Mihailo Petrović Alas”, Mr. Miroslav Lukić, composed a book of inventories where he made entries for over 400 items. They can be grouped as follows: personal objects, such as clothing, writing utensils or a violin; personal documents, including a passport or a military ID card; letters, photographs or journalistic puns. The bulk of the legacy consists of letters, postcards or telegrams by Prince Đorđe Karađorđević, Mihailo Petrović’s pupil and friend, written circa 1914–1918. The letters of Petrović’s assistant, Mladen Berić, composed in the summer of 1918, have also been preserved, as well as the letters by Petrović’s family: sister Mara, her husband Živojin Perić and daughter Vuka. The materials are mostly in Serbian or French and are well preserved. Even though one part of it has been presented on the official web-site of the Foundation, it is recommended that conditions be ensured for its further keeping as well as to fully digitalize it and make it accessible for future research. 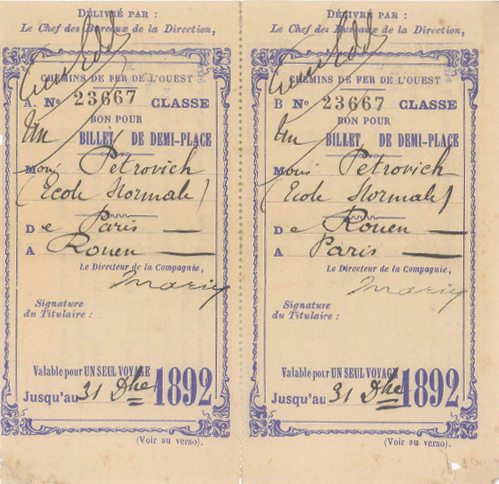 Original manuscript notebooks from Mihailo Petrović’s lectures were accidently found in 2012 in the Mathematical Institute of SASA in Kneza Mihaila Street no. 36. The details of their discovery were described by Professor Žarko Mijajlović in one article, which reveals that they have been composed by a student of Petrović, Borivoj J. Pujić, in the period between 1910 and 1914. It is assumed that Pujić had personally bequeathed the notes to the Institute and that they were recorded in a library catalogue in the 1960s and are not available as a part of the Digital Legacy of Mihailo Petrović. It should be taken into account that the Institute also holds other archival materials that may be useful for studying the influence of Mihailo Petrović on the development of mathematics in Serbia. Thus, for example, the Book of Minutes from the meetings of the Council of the Mathematical Institute of the Serbian Academy of Sciences in 1950, contains notes about the translation of the doctoral dissertation of Mihailo Petrović, as well as about the preparation of his selected works. The problem is that this archival material is not recorded or classified and that at this moment it is not known what it encompasses precisely. It would be recommended to classify the existing materials, as well as to create a register so that the broader scientific community could familiarize itself with its contents. 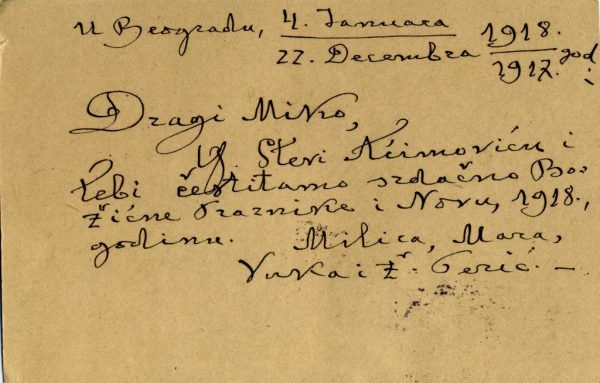 The SASA Archive holds over 120 Petrović’s photographs. Even though they were classified into two separate halves, no individual entries were made and there is no accompanying description of persons or events, or time and place of origin, apart from some anonymous notes. The assessment of the author of this article is that they cover the period from 1885 to 1941 and thematically encompass family and school photographs, military photographs from the time of Balkan wars and the First World War, group photographs with fellow university professors and scientists, as well as photographs taken when fishing, travel photographs and those with the musical band “SUZ.” A part of these photographs was scanned in 2003 and preserved on a CD, which is accessible to users of the Archive. In addition to photographs, Petrović’s legacy also encompasses several letters and manuscripts. Special materials are minutes from the meetings of the Academy of Natural Sciences and the Presidency of the Serbian Royal Academy, which testify about the election of Petrović for an academician and his work as the representative of the Academy. These minutes were published in Serbian Royal Academy Yearbooks for the period after 1896. 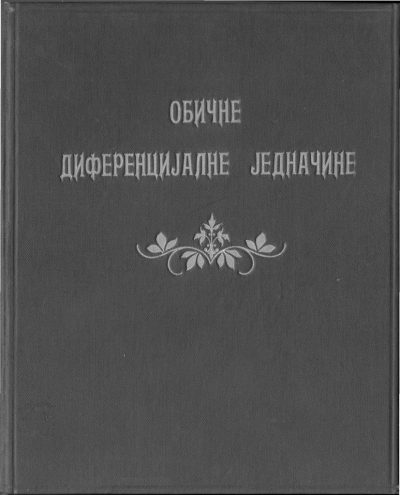 The front cover page of the book of notes taken from Professor Petrović’s lectures on the ordinary differential equations, around 1910–1914. (Library of MISASA, 3262)

The materials on Mihailo Petrović in the Archive of Serbia do not represent a single holding, but have been placed in several administrative funds, so their study requires dedication and time. They encompass primarily the fund of the Royal-Serbian Ministry of Education and Church Affairs, which is preserved in the Archive building in Karnegijeva street no. 2. It contains some thirty letters, applications and approvals in the period from 1890 to 1894, in connection with issues of Petrović’s scholarship for studying abroad. A part of that fund is a hard-cover manuscript book with a decree on the appointment of Mihailo Petrović as full professor of the newly established University of Belgrade in 1905. The fund of the Ministry of National Economy, the Department for Trade, Handicraft and Traffic contains a group of documents related to Petrović’s participation at the World Exhibition in Paris in 1900. The funds record of the Faculty of Philosophy in Belgrade and the University of Belgrade, kept in the Archive building in Železnik, contain over 150 units testifying about the work of Mihailo Petrović as a university professor in the period from 1897 to 1941. They include Petrović’s reports on the work of the mathematical cabinet and seminar, his proposals for appointments and promotions, funding applications etc. One should bear in mind that the materials on Petrović can also be found in other funds, such as the fund dedicated to the Grand School, so consequently the creation of a digital themed collection, which would encompass at one place the appropriate materials from various administrative funds, would facilitate and render further research more efficient. 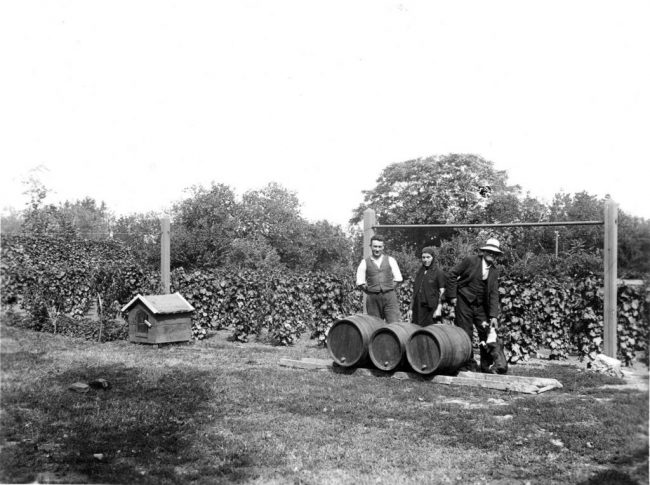 Petrović’s vineyard at Topčidersko Brdo. All the way to the right: Mihailo Petrović, with his dog Beka. (SASA Archive, 14188/26)

The archival materials on Mihailo Petrović, in addition to the aforementioned, are also kept in the Archive of Yugoslavia, Museum of the City of Belgrade, Museum of Science and Technics, Museum of Natural History and University Library “Svetozar Marković.” Therefore it would be recommended to create an instruction manual for archival research on the life and work of Mihailo Petrović that would identify research questions and contain a review of the existing archival materials. It would be recommended that such a manual be visible and accessible on the global network in order to facilitate the research process, link with a broader context and create conditions for future networking and cooperation. 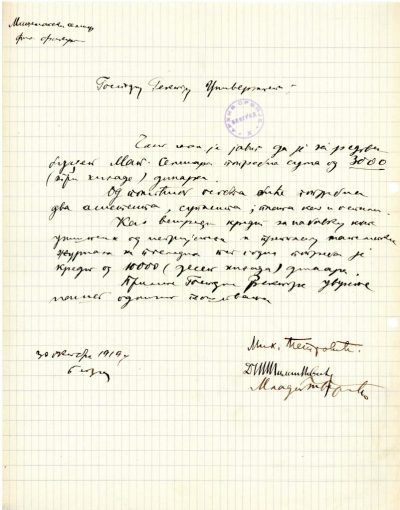