AN OBSERVER FOLLOWING AUDIO-VISUAL media representing integral records of a time, and containing simultaneously images, words and sounds, is familiarized with such motion pictures as may also be taken as documents and testimonies of a specific time period, even an epoch. Such recordings, which have woven into their form and structure the name, and works of, Mihailo Petrović Alas are but few. Movies, shows and series about Petrović are important to us not only because of their informative value, but also due to reproduction and their conjuring, or rather creating, a picture-image of the time in which Mihailo Petrović lived and worked.

In the history of video material commemorating Petrović, one of the first recordings, made on the occasion of the centennial of Petrović’s birth, is the short documentary film Mika Alas made in 1968, based on a script by Professor Dr. Dragan Trifunović and Miodrag MIja Jakšić. The film, directed by Miodrag Mija Jakšić, was made under the auspices of the Center for Scientific-Research Film of Television Belgrade, and assumes a documentary approach in the manner of its presentation. The film shows archive photographs and dramatizes the biography of Petrović, but also depicts his passion towards both science and mathematics, and for fishing, travels, nature and music. A year later, in 1969, Miodrag Mija Jakšić wrote the script for, and directed, another short documentary on the musical band SUZ of which Petrović was a founding member.

The 1971 feature film Šešir profesora Koste Vujića (Professor Kosta Vujić’s Hat) is a Yugoslav television drama, directed by Vladimir Andrić; Milovan Vitezović wrote the script, which was adapted by Bojana Andrić. Subsequently, even though it had been originally written as a novel, the movie had its premiere on February 24, 1972 and has been shown on TV six times since then, being the most popular TV drama of Television Belgrade. It was included in The Anthology of Television Drama in 1975. The script for the TV drama was subsequently turned into a novel of the same title by Milovan Vitezović in 1983. The movie portrays the famous generation of graduates of the First Male Gymnasium in Belgrade in 1878–1885. A TV series was made in 2012, which is itself a remake of Professor Kosta Vujić’s Hat; and subsequently the feature film directed by Zdravko Šotra. 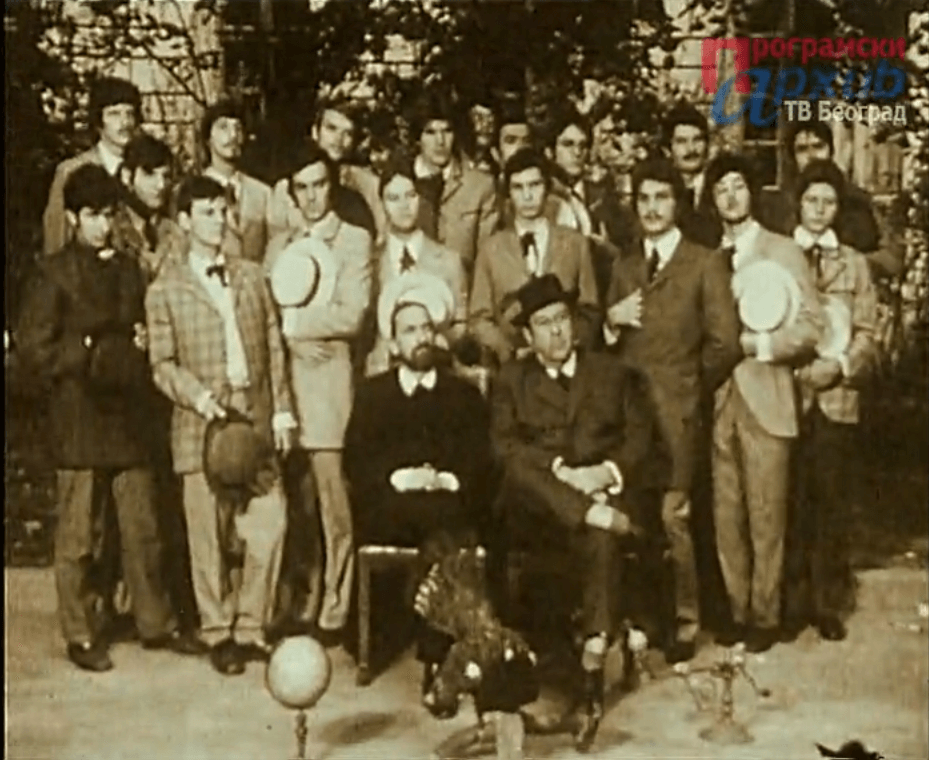 The generation of graduates of the German language professor Kosta Vujić produced great names in Serbian science and culture. In the 1971 movie, the character of professor Kosta Vujić was portrayed by Pavle Vujisić, while the roles of graduates were played by: Vojislav Brajović as Mihailo Petrović Alas, Goran Sultanovića as Jovan Cvijić, Milan Mihailović as Milorad Mitrović, Miroslav Aleksić as Pavle Popović, Josif Tatić as Jaša Prodanović and Mihailo Viktorivić as Đura Kozarac, the director of the First Belgrade Gymnasium. 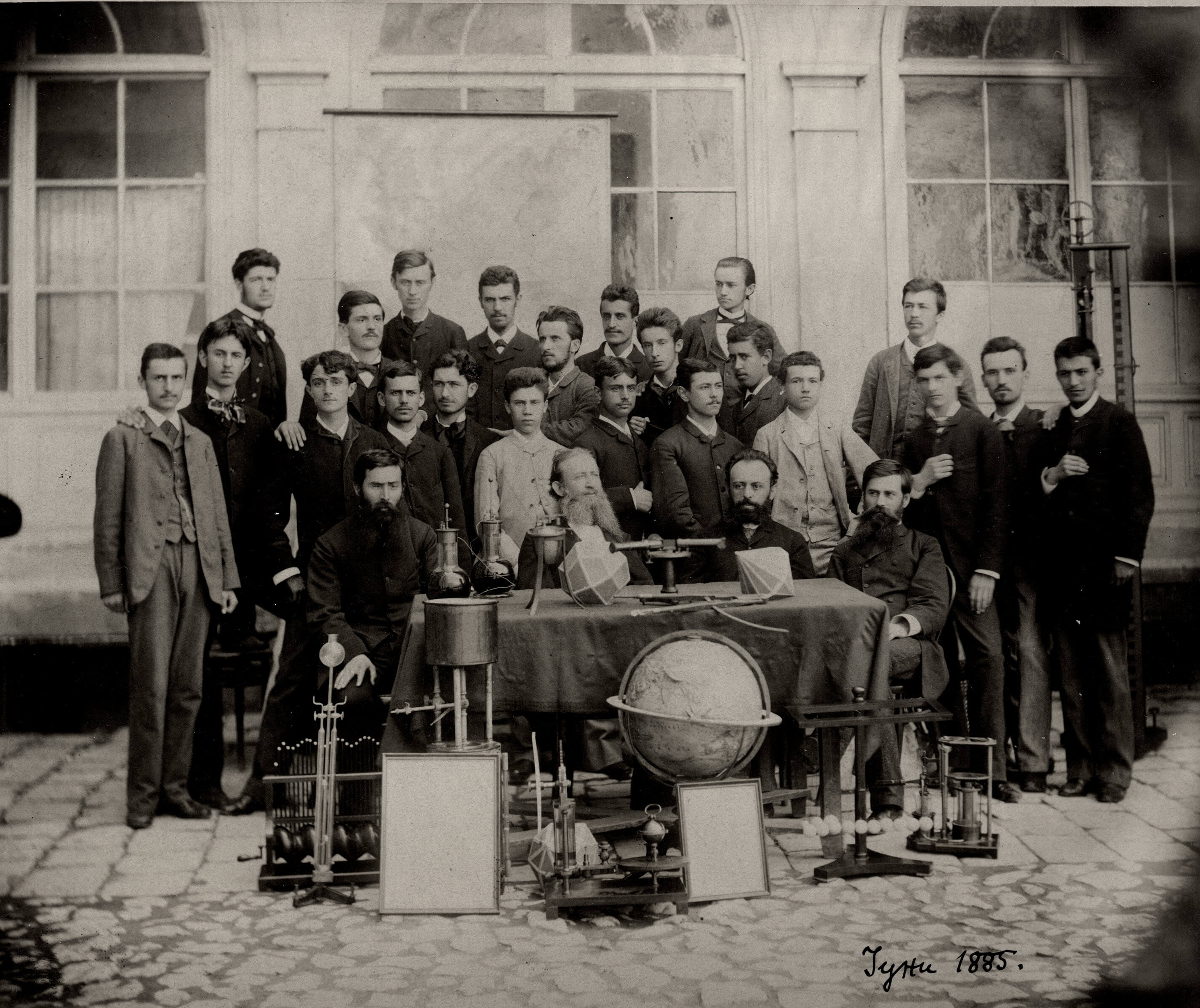 On occasion of the centenary of the First Belgrade Gymnasium (1939), Mihailo Petrović wrote about his generation:

“Some of us whom our teachers had utterly given up on, and of whom even our own friends said would come to no good, later became what could not possibly have been expected of them: excellent writers, first-class journalists, or other things. Conversely, among those who had excellent marks at school, there were many who did not turn out to become what they were forecasted to be, and they left a trace in life much weaker than those depended on for nothing.”

Of the television shows which were part of the scientific-research program of Radio Television Serbia, there are a couple of series which portray the life and works of Mihailo Petrović. One of them is 1989’s The Scientiﬁ c Feuilleton: History of Mathematics in Serbia. The five episodes of the series, entitled respectively: The Origin, The Party Politics, The Return to Serbia, On the Right Track and Maturity, portray, as their titles suggest, the history of mathematics in Serbia. The episodes concisely and accurately depict the history of science and culture, providing a rich material tapestry, as well as the origins and birth of mathematics in our country. They were based upon the ideas of professor Dr. Dragan Trifunović, prepared and supervised by professor Dr. Milan Božić, and directed by Pavle Grujičić. The last episode, Maturity, wraps up the series, and featured the life and work of Mihailo Petrović.

From the television series Then and Now created by Branko Milovanović, we single out the thirty-minute program The Three Lives of Mihailo Petrović, directed by Nikola Stanković in 1984. It shows Petrović’s unusual versatility of character, emphasizing “the three lives led by Mihailo Petrović, of which the first was his life as a scientist. The second was his life on the river, fishing and befriending fishermen and skippers. The third life, and perhaps his greatest love, was his violin; and music, singing and merry-making.” The show featured professor Dr. Dragan Trifunović, a mathematician, historian of mathematics and biographer of Mihailo Petrović, and Petrović’s friends Višeslava Đuričić and writer Mladen St. Đuričić. 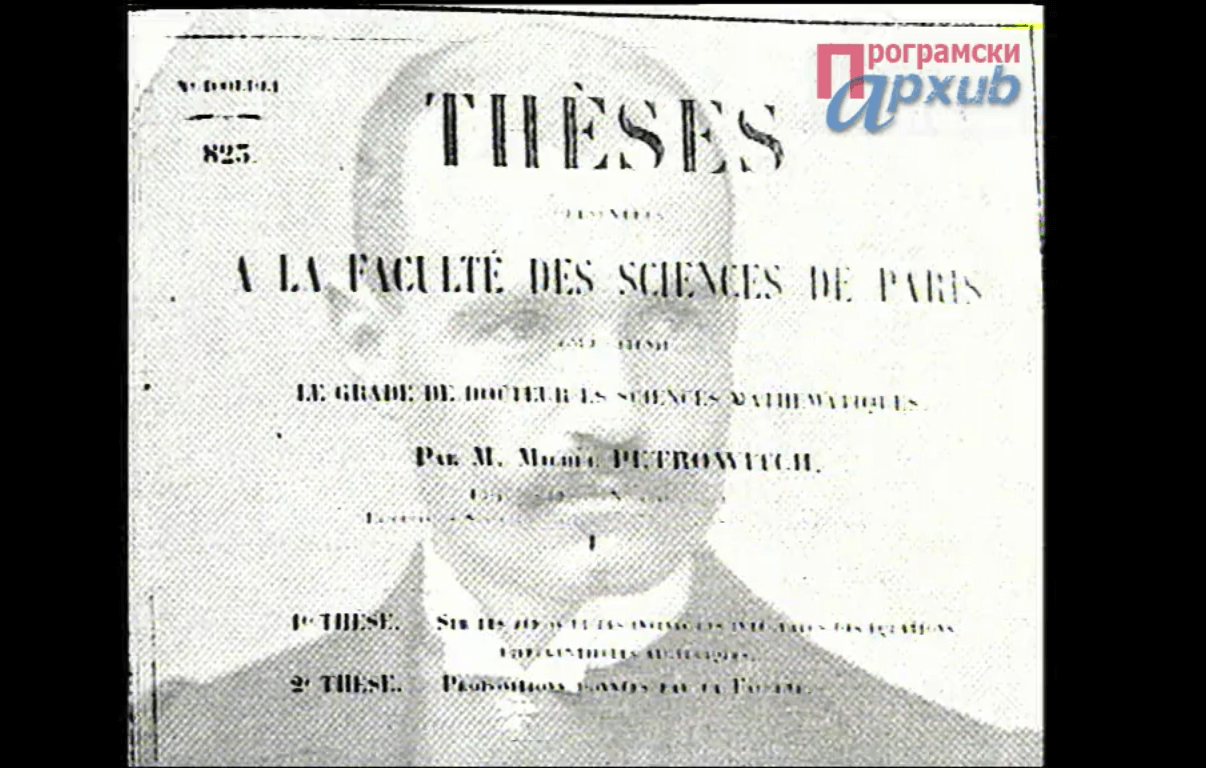 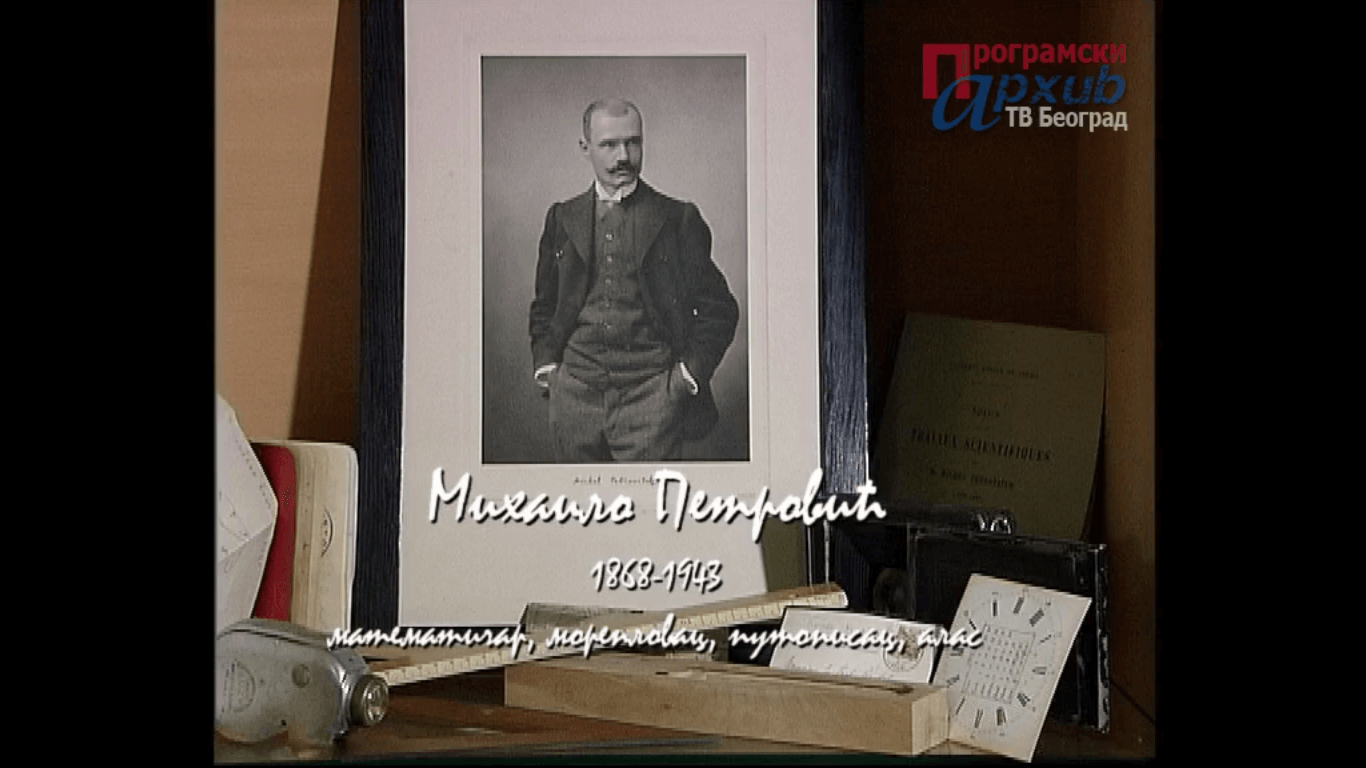 The editorial board of the Science and Education Programming of Radio Television Serbia prepared in 2010 a series entitled History of Science: TV Lexicon. Selecting fifteen scientists, among them Mihailo Petrović Alas, the series employs the short documentary form, and brings informative shows on important personages and achievements of our scientists who have left a major trace in science in Serbia and beyond.

Audio-visual records manifest as media which possess the power not only to reflect but also to project living memory, the place which preserves and encourages the unforgettable. They can be called a tool –a media between subjective and collective memory. Video media, with pictures, bring us into modernity and acquaint us with different reading of the meaning and purpose of objects and phenomena and create a new visual world. These media may separately provide an exhibition of a time, of people’s lives, presenting and materializing their thoughts, musings and imaginings.

The inquisitive spirit of Petrović’s inspirations for science permeates some of these shows and films. Emphasizing his love of nature, especially rivers, for example in the short documentary film Mika Alas from 1968, based on the script by professor Dr. Dragan Trifunović and Miodrag Mija Jakšić, the narrator makes a statement, but also poses a question: “From his very childhood, Mihailo was fascinated with rivers and people on their shores, old wise fishermen, their craft and their exciting stories. The river flowed incessantly. The clock was ticking inexorably. Will that have any meaning? Significance?”

This section of the film’s narrative is suggestive of Petrović’s close relationship with nature and science, or, more accurately, it suggests that Petrović will draw inspiration from n ature; that in nature he will find poetry, and in poetry mathematics. As he himself has stressed: “Not only do true poetry and true science have common points, but they also display deep common properties. One such property, so much so that it is sometimes difficult to tell where science stops and where poetry begins, consists in revealing and utilizing similarities among disparate elements and facts.” Such examples could be used to make an analogy and emphasize proximity with the views of French painter Eugène Delacroix (Delacroix Ferdinand Victor Eugène, 1798– 1863), a realist painter who in his Journal (Thursday, May 6, 1852) wrote the following about the significance and the bond which binds nature and science, defining it in the following way: “Scientists ought to live only in villages, close to nature: they like to talk in the green pastures of academies and institutes, about things which the world knows equally well as them: in forests, on the mountains, you observe natural laws, you cannot make one step without seeing an object you can admire. An animal-beast, a plant, an insect, earth and water, are food for a spirit which examines and wants to record various laws of all these creatures-beings. However, these gentlemen do not find in it a simple observation worthy of their genius: they want to break through and force systems from the depths of their offices which they take as their laboratory. And in addition, one should visit salons, have crosses and salaries: science which takes that road is not worth anything.” Petrović’s science did not take that road. It reaches its pinnacle both in his works and invention and in works which were and are being created about him.