THE LIFE OF MIHAILO PETROVIĆ ALAS was rich not only scientifically but also socially speaking. Among other things, including the fishing, he was known as a lead violinist, a lover of the urban folk music of his epoch and he actively played with his own music band, Suz.

As a student of the First Belgrade Gymnasium, in 1880 he started teaching himself to play the instrument. However, Jelenko Mihailović wrote that Petrović was taught by a tavern violin player, one Arsa Jovanović “Škembonja,” whom he later honored by paying him twenty-five dinar every month and sometimes passing on to him a used suit, or a pair of footwear. Many years of music making, which continued during his stay in the Paris boarding school for his university studies, led to the need to establish “music playing society” in 1893 (in the middle of the grape harvest season). In January 1896 this society gave birth to a bigger orchestra, called Suz, which counted one dozen men and included several violins and basprims [traditional string instrument of the tamburitza family], cellos, a double bass and possibly some other instruments. Once they founded said music society, Primaš Petrović insisted on solid music-making technique and the sevdah approach to music, but also on preserving honest reputation of the orchestra, as evidenced by the memories of Mladen Đuričić and Mihailović. Joint rehearsals were held at homes of individual members. Soon after they started playing, the band adopted St. Apostle Philemon as their patron saint day, which they tended to celebrate for two days (including patarice). These celebrations were attended by a large crowd of invitees (sometimes the number exceeded five hundred). The hearty dinner, which always included “Mika’s Master Fisherman Soup” (Mikina alaska čorba), was preceded by the ceremonial cutting of the saint patron bread-cake and it was followed by a bash and a ball. The band performed in Serbia (Mladenovac, Aranđelovac, Palanka, Trstenik, Vranje, Vranjska Banja, Dimitrovgrad, Pirot, Ristovac, Ćuprija, Smederevo, Veliko Gradište, Zemun, Stara Pazova, Sremski Karlovci, Fruška Gora, Novi Sad, Vrbas, Bačka Palanka, Srbobran), and also visited Bulgaria (Sofia). Petrović, the Suz band, and their friends compiled a multi-volume book, Proper Wit and Wag of this World (Cjelomudrenija ovog sveta made up of the clippings of advertisements they found amusing. 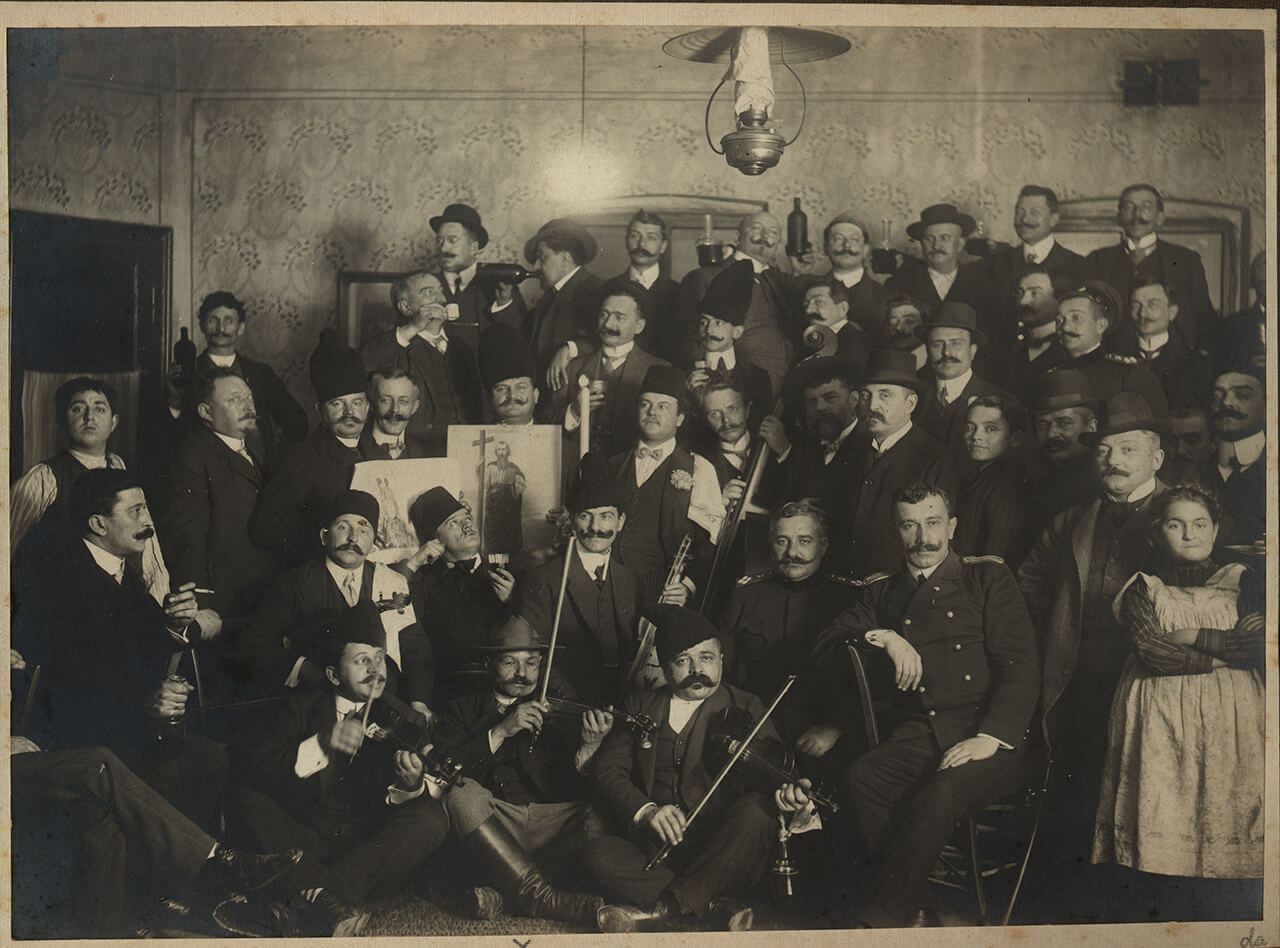 The orchestra sang and played by ear, and it is interesting to note that it collaborated with the popular singer, a lawyer by vocation, Mijat Mijatović (picture 1). Petrovic’s playing intonation was higher than the tones of the standard notation system. He used five tonalities which he dubbed: suz (similar in tonality to C-major, and the name also used as the title of the orchestra), krkaleska (D-major), rep (E-major), repov rep (F-major), major (G-major).

Urban folk music at the time of Mihailo Petrović, i.e. from the mid-nineteenth century until the Second World War, was performed mostly in the taverns (kafana) by the tamburitza or the string bands (the latter could include, for example, a piano or an accordion). In addition to the Western origin harmony, urban folk music was also characterized by a melody of broader scope in comparison to rural folk music, and abounded in conspicuous musical embellishments, often oriental in style. Being a genre of popular music, it constituted the mainstream music content of the then media industry (songbooks, radio-broadcasts and gramophone records), but also received much academic (ethno-)musicological criticism that perceived it as corrupting the folklore music and denounced its shallowness, in terms of aesthetics and content, in comparison to the artistic music. Its manifesting forms were called: a sevdah song (sevdalinka), a “small town ditty” (varoška popevka), gipsy music, a romantic tune (romansa); in certain contexts, such music could be found in the framework of dancing and parlour music. The musical activity of Mika Alas entirely belongs to the tradition of urban folk music, as evidenced by a press article Petrović wrote for the Politika daily in 1940, about Mija Seferović “Jagodinac”, a Roma violinist who was famous before the First World War. Completely unperturbed by the elitist concepts of music, Petrović noted: “[…] Whether playing folk or artistic music, a Gypsy musician cannot help himself and always must add a bit of “gypsyism” to a tune. He feels compelled to additionally embellish it in his own way, emphasize what he feels is beautiful, add even more musical ornaments, all of which our folk finds both likable and winsome. It is that gypsy element in music which our folk loves and feels more deeply at their core than they love any proper or healthy, higher music; this is what touches our people, what they enjoy, what makes them enthusiastic and sometimes, even ecstatic, and that is why such music will always remain the music for the masses.” From the above newspaper article, we learn about the Roma music ensembles (kapela) in Serbia, about Belgrade’s taverns, and we learn even more about the music technique, his orchestra, their repertoire, his creed and teachings, and also about the life of folk musician, Mija Jagodinac (an almost unknown individual in the world of ethnomusicology). 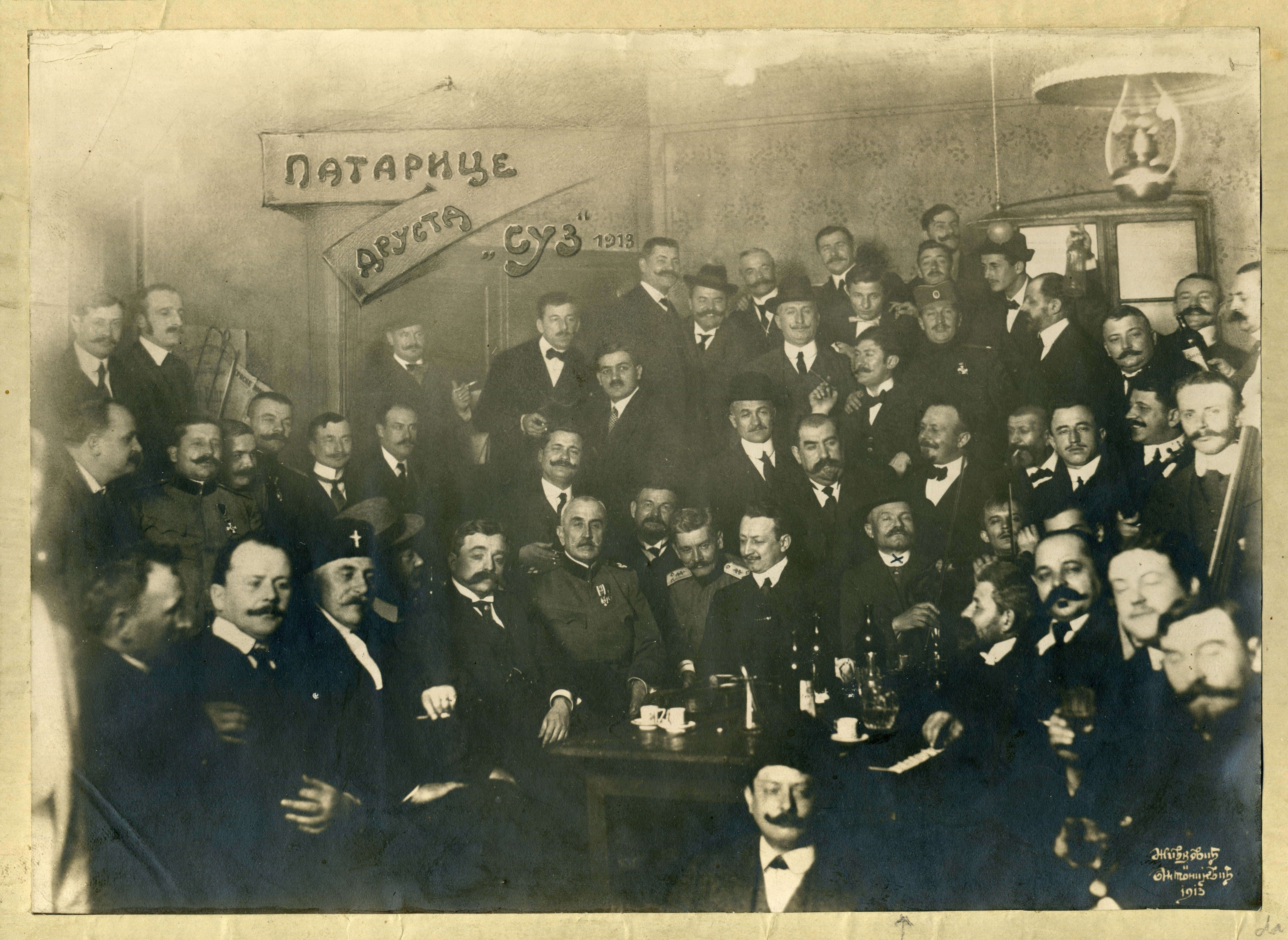 Famous for his affection of the sevdah songs, Petrović was a frequent guest in Belgrade’s taverns – for example, in the “Serbian Crown” (Srpska kruna) where foreign entertainers performed. He would sometimes play in some of them – for example, in the “Borča” tavern, in the Jewish district (mahala) in the Belgrade borough of Dorćol (also the seat of the Fishermen’s Association). Numerous anecdotes link him to some of these places. One day in 1878, in the Hotel Thessaloniki (Hotel Solun), situated in the Nemanjina Street, performers at the restaurant left their musical instruments on stage during their break. Petrović’s musicians grabbed the instruments and played so well that they received ovations, after which the musicians learned never again to leave their instruments unattended. Another anecdote has to do with a Roma ensemble which often played in the “Struga” tavern in the Belgrade borough of Čubura. One day the owner, not knowing who Petrović was, invited him to play with his orchestra that evening. According to the information passed on by Vidoje Golubović, Petrović accepted with a smile but later failed to collect his fee because of the riot caused by the drunken guests. A similar thing also happened in the “Czech Crown” (Češka kruna) tavern, where Petrović’s orchestra again spontaneously found themselves among the guests who felt they had every right to “order a song” from the band. They also played in private festivities, such as the one which took place at the Hotel Bristol on February 19, 1939, seventieth birthday celebration of Jelenko Mihailović, a member of the Suz band and the Provost at the Higher School of Pedagogy. 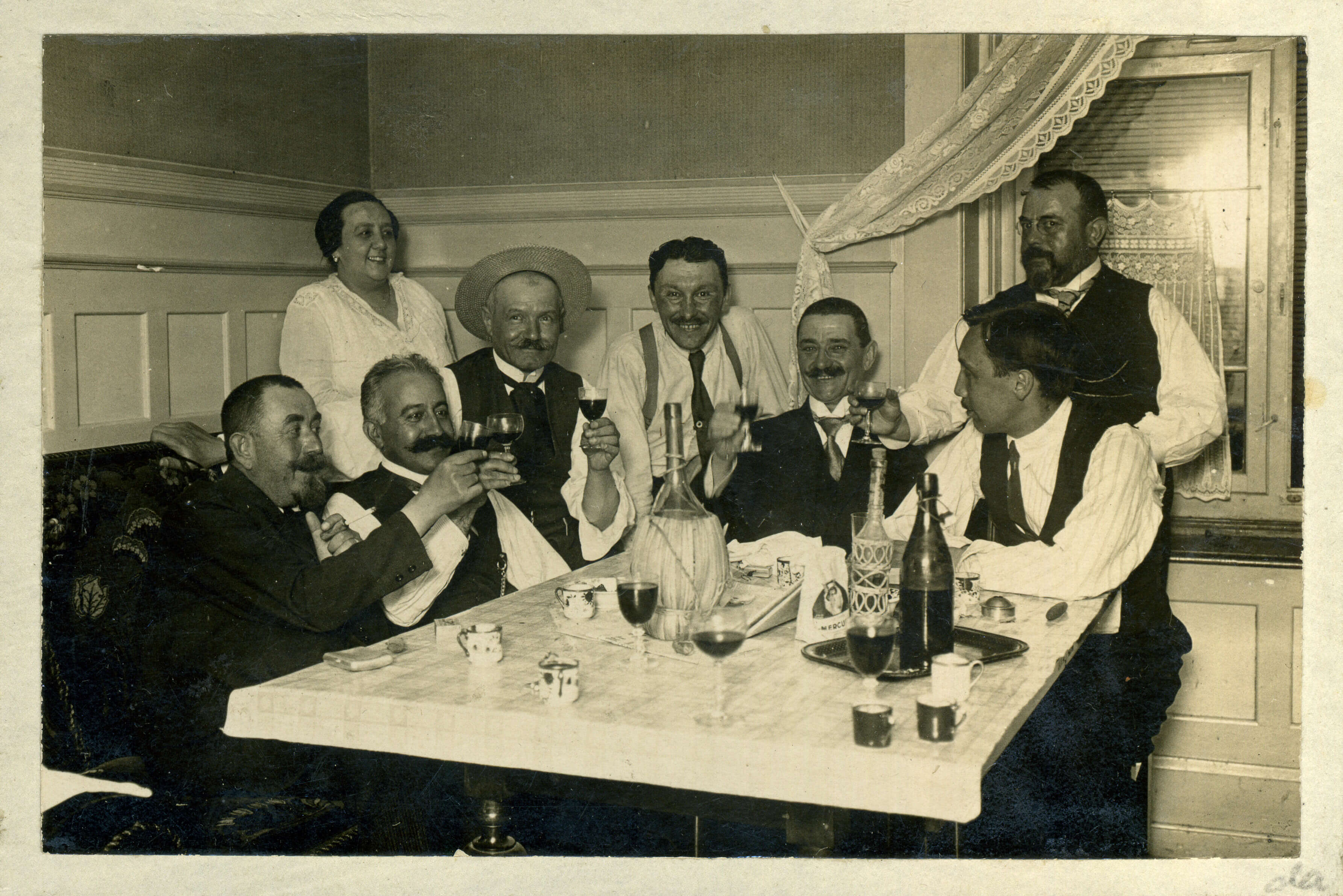 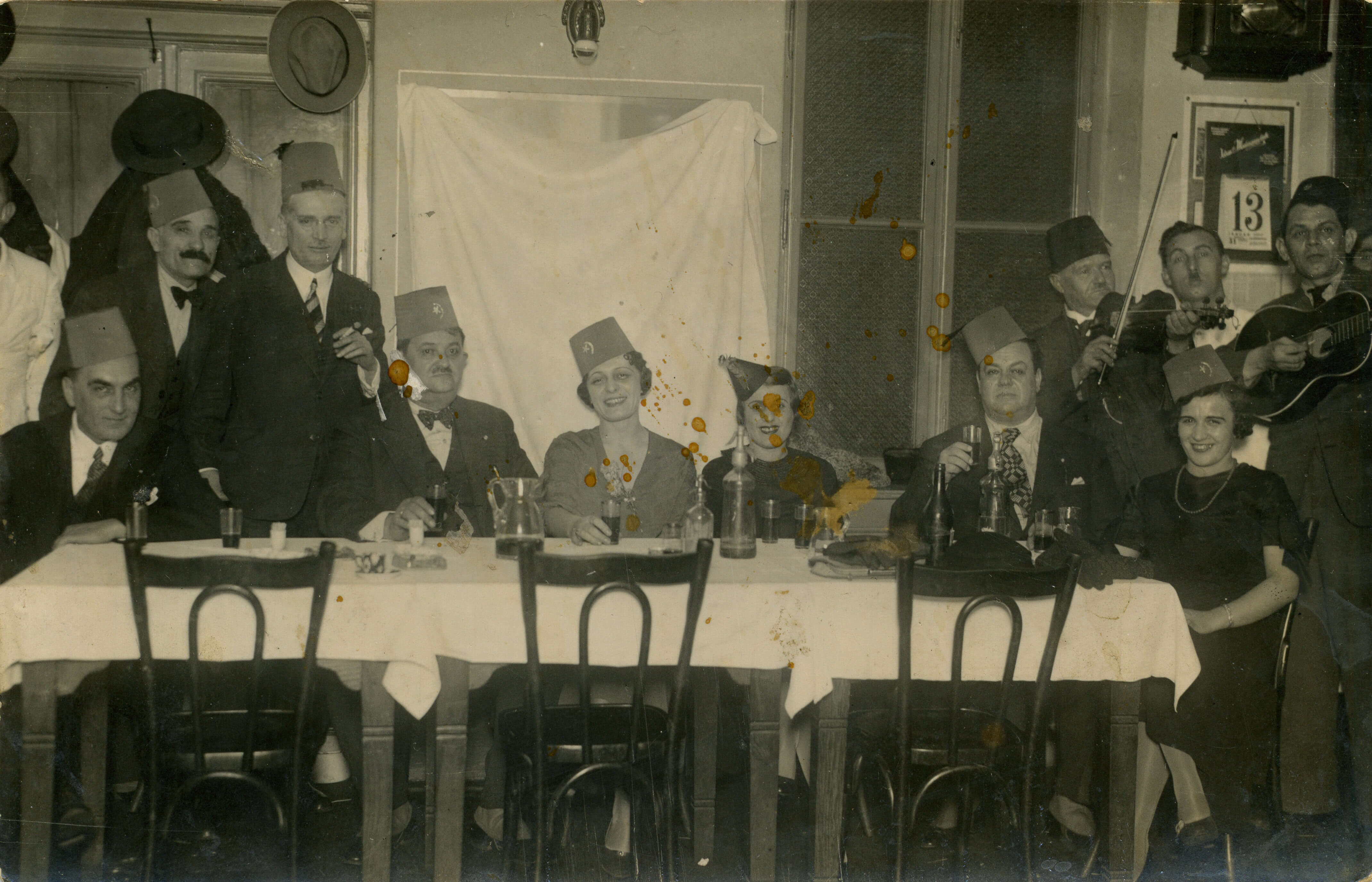 According to the Annals (Letopis) by Dragan Trifunović, Petrović’s repertoire included over seven hundred folk dance melodies (of which over three hundred of the more complicated ones survived only owing to being performed by Suz), two hundred forty folk song melodies, and some ninety tunes from different parts of Yugoslavia. The 1934 article in the Politika daily cites the following instrumental tracks as repertoire curiosities: Čobansko kokonješte, Vujčino kolo, Karaman kolo, Mečke, Rapino kolo, Trapađoz, Krivka, Prevrtaljka, Sveti Pavle, with the comment that musicians could play as many as twenty-three variants of Kukunješće and twelve variants of Vlajna. It is interesting that they included the Meljak Matraljez (or “gypsied” Marzellez) in their repertoire, along with other poetic mishmashes, which they obviously found amusing. In literature, one often comes across comments about Petrović also being a collector of folk melodies, and that in the autumn of 1940, he and the Suz cut a gramophone record with Radio Belgrade. Unfortunately, even if they existed, these notations and sound recordings have not been preserved.