THE INFLUENCE OF MIHAILO PETROVIĆ ALAS ON ARCHEOLOGY

IN ADDITION TO HIS IMMEASURABLE contributions to mathematics and the development of this science at the Belgrade University, as well as to ichthyology and commercial fishing, and indeed to the genre of travelogue, it is less known that Mihailo Petrovic Alas also left his mark in archeology. At first glance, this connection does not appear obvious, nor is there too much data. However, it is important to note that Alas’ passion for fishing not only took him across the seas and oceans but also into the past. His minute studies of the written records, and the interviews he conducted with the old fishermen, he sought to preserve the memory of the old fishing techniques, which he first became interested in already as a boy, and grew even more so during his adult life. The historical dimension of Alas’s work was especially evident in such works as Beograd, negdašnji centar velikoga ribarstva (Belgrade, the Former Center of Great Fishery, 1940) and Đerdapski ribolovi u prošlosti i sadašnjosti (The Iron Gates Fishing in the Past and Present Times, 1941). In the former, he refers to various travel writers who visited this region starting from the 16th century, and writes about the formerly highly developed trade in local and migratory fish, the aspirations of different sides to exert control over the region throughout its turbulent history, about the picturesque Belgrade riverbank wastelands, and the early beginnings of the organized fishing industry in Serbia.

His other piece of archeology related writing, The Iron Gates Fishing in the Past and Present Times, was dedicated to specific fishing methods applied in the Iron Gates Gorge (Đerdap), a landscape that held particular importance for Alas, and where he always happily returned. According to Alas, fishing in the Iron Gates was entirely based on exploiting the obstacles in water and the river currents that directed the movement of fish – especially large sturgeons and other species from the beluga family, in their seasonal migrations from the Black Sea. As a particularly opportune place for fishing in the gorge, Alas emphasizes Gospođin Vir (The Lady’s Whirlpool), where the waters collided with rocks and formed a deep and noisy whirlpool, the strongest one in the entire course of the Danube river. Carried by the current, large sturgeons (which could grow up to five meters long), belugas, catfish and other fish flew right into the “setovi” (anchored ships with fishing nets), strategically positioned nearby the whirlpools. Except for the gorge, and the Gospođin Vir, whirlpool fishing was practiced in the downstream gorges, in the Kazan (the Caldron) and Sip sections of the Iron Gate, all the way to the Negotin Krajina. However, people also used other techniques downstream, such as the “beluga fishlines” (dense webs of fish hooks) and “garde” (elongated wicker baskets). The link between a specific fishing technique and a location within the Iron Gates was very important, and, according to Alas, it was possible to trace it back to the Middle Ages, the Turkish period, up until the time of Alas’s writing. However, after regulating the flow of the Danube river in the Iron Gates Gorge in the late XIX century, such methods of fishing increasingly disappeared, and Alas considered it his duty to document and preserve them from oblivion.

Map of the Đerdap Gorge (the Iron Gates Gorge), depicting the archaeological sites dating from the Mesolithic and Neolithic periods (9500–5500 BC) which are mentioned here.

Twenty or more years after Alas’ death (in the sixties and seventies of the XX century), yet another immense transformation stormed the Danube river: the construction of the Iron Gates Gorge dam and power plant. The idea behind this project was to exploit the hydroelectric potential of the river and facilitate navigation, but at the same time it significantly elevated the water level, affecting a drastic change in the landscape, and flooding both the then existing human settlements and the archaeological sites appearing throughout the coastal area. As a result, extensive archaeological research was undertaken in order to preserve and collect as much information as possible about the history of this area, previously known primarily by the remains from the Roman period. It included the right riverbank (the Serbian side, but at the time, the Yugoslav side) and left (Romanian side). However, during these campaigns, unexpected discoveries were made: numerous prehistoric (mesolithic and neolithic) sites (Figure 1) appeared, tracing local human presence back to between 9500 BC and 5500 BC. On the Serbian side, it was indeed the area of the Gospođin vir that was most closely explored. Settlements such as Lepenski Vir, Padina and Vlasac were discovered there, exhibiting previously unknown forms of architecture, sculpture, and traces of complex and varied funeral practices. Particularly sensational was the discovery of Lepenski Vir (Figure 2), a settlement distinctive by a large number of trapezoid building structures found, with solid red limestone floors, rectangular hearths, and representational sculptures. 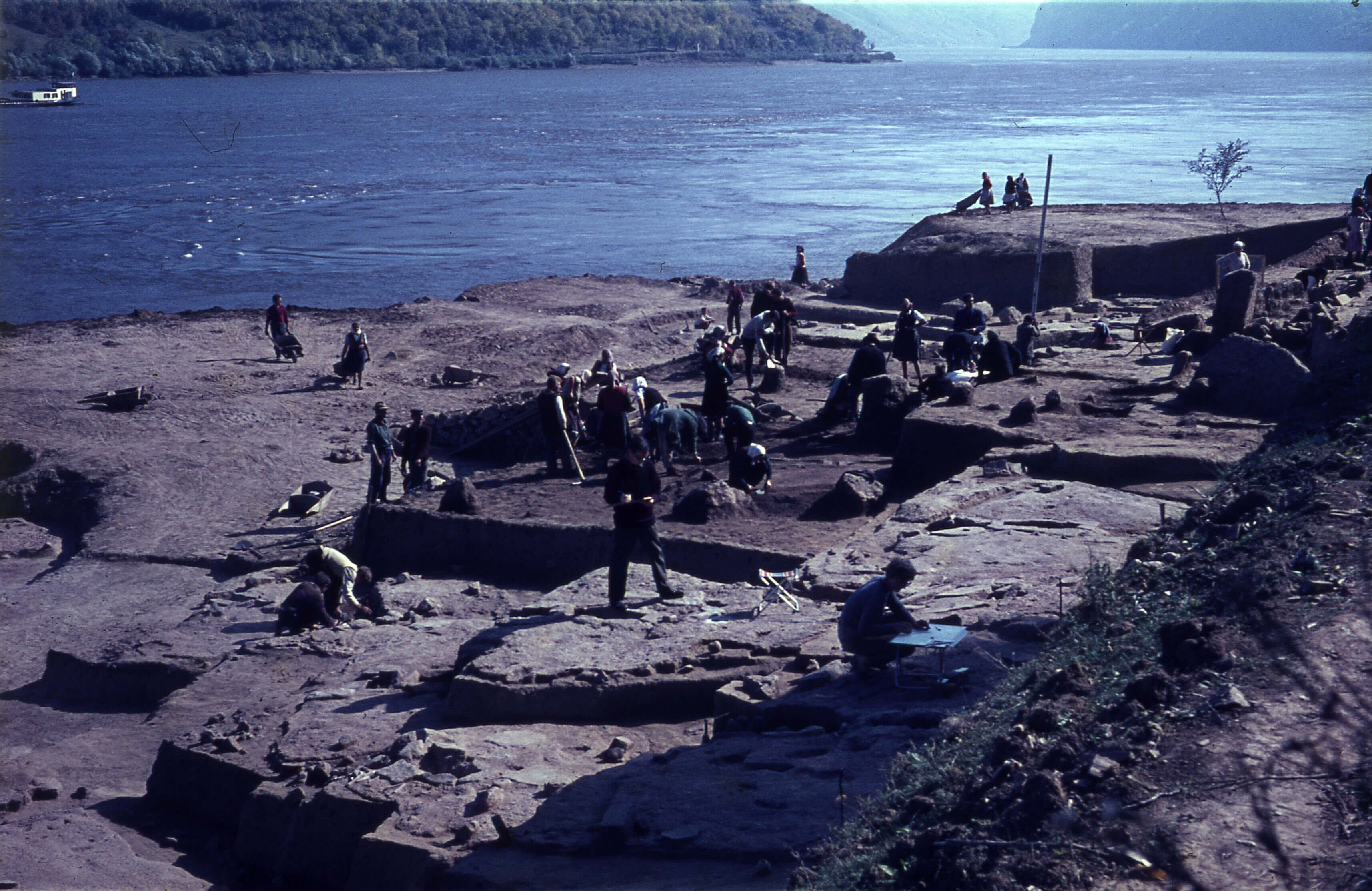 Archaeological research at Lepenski Vir in 1968 (National Museum in Belgrade)

From the very beginning of archeological research, the prevailing hypothesis was that the prehistoric humans settled in Iron Gates Gorge precisely because of the fishing, and that fish was the most vital foot, as well as an important symbolic resource. Such hypothesis was corroborated by large quantities of discovered fish bones, fishing tools, sculptures of “fish-like” creatures, artifacts with depictions of fish, but also the very position of these settlements – on the river terraces, nearby powerful whirlpools. In his monograph about his research conducted at Lepenski Vir (1969), the famous archaeologist Dragoslav Srejović (Photo 3) stated that the fish (sturgeon, thorn sturgeon, catfish, carp, zander) formed the basis of nutrition, and that the Lepenski Vir fishermen probably used traps in the shallow waters to hunt for fish stranded by the river current and strong whirlpools, near their settlement. It is interesting to note that Srejović’s descriptions are unusually reminiscent of those of Alas’S, which seem to have served as an inspiration. Moreover, at the time of Srejović’s writing, the fish bones from Lepenski Vir have not been thoroughly analyzed to determine the specific species, and it is possible that he got his clues about the fish from reading Alas’s books. Archaeologist Ivana Radovanović indeed interpreted some of the sculptures found in Lepenski Vir (with characteristic curved mouths, pronounced gills and a rows of sculpted bone plates on the back) as representations of sturgeons (Figure 4). Subsequent analyzes of fish bones found that, indeed, many were that of sturgeon and related beluga species, which the inhabitants of Lepenski Vir and other Iron Gates Gorge settlements intensively hunted during their spring and autumn migrations from the Black Sea.

A comparison of the anatomical characteristics of a beluga sturgeon (large, bent mouth and a row of bone plates on the back, a-b) with a sculpture found in the building 57/XLIV at Lepenski Vir. (Sculpture “Danubius”, National Museum in Belgrade, inventory number 2/38; Stuffed Beluga Sturgeon, Jonathan Cardy, 2014; Huso, huso. Jakob Heckel & Rudolf Kner, 1858)

When, in 1978, Srejović published a monograph about his research conducted at the Vlasac site, together with Zagorka Letić, Alas’s name was mentioned in the Introduction, when discussing the excellent conditions for fishing that the Gospođin vir in the gorge provided. It becomes clear that Alas was “present” in archeology from the very beginnings of the research of Iron Gates Gorge, and that his work had already served both as a tool for interpretation and as a medium to present the ancient past more vividly.

The later generations of archeologists who worked on the phenomenon of the Iron Gates Gorge mesolithic and neolithic past, made explicit use and abundant references to Alas’s work on fishing. Thus, Dušan Borić noticed incredible coincidence between the best fishing places listed by Alas and locations of archaeological sites. As already mentioned, Alas specifically highlighted fishing in Gospođin vir (which corresponds to the sites of Padina, Lepenski Vir and Vlasac), the Kazan section of the gorge (with the sites of Kuina Turkuluj, Klimente and Veterani), near Ogradene (with the Hajdučka Vodenica, Razvrata and Ikoana sites) and Velesnica (with the archaeological site of Velesnica discovered in its vicinity). Inspired by Alas’s descriptions of seasonal migration of large sturgeons, this author noted that humans in prehistoric time of the Iron Gates Gorge experienced time as a series of cyclical fishing practices, and that autumn as a season had pivotal role in social memory. Dušan Borić and Dragana Antonović reliled on Alas’s data to reconstruct fishing techniques used in prehistoric times. Thus, rock made hammers found in the archeological the sites in Iron Gates Gorge were interpreted as “fish dazers,” while the stone tools with wedges were used as weights for securing fishing nets, similar to the tools Alas described.

Starting with Srejović, as well as in the work of later researchers, Alas’s Đerdap (the Iron Gates Gorge) “was put on the map” in terms of its archaeological past, and inextricably linked to human presence in the mesolithic and early neolith past, in both archaeological community and the general public. In other words, our present perception of Lepenski Vir and other prehistoric settlements has been largely shaped by The Iron Gates Fishing in the Past and Present. The past described by Alas encompassed primarily his youth and childhood, as well as the times of the Turkish presence in the region, all the way to the Middle Ages. Seeking to preserve it from oblivion, he certainly did not expect that his records would be used to archaeologically reconstruct and revive such distant past of many thousands of years.