MIHAILO PETROVIĆ AND THE PHILOSOPHY OF SCIENCE

AN IMPORTANT PLACE IN THE RECORDS of Mihailo Petrović, the founder of the mathematical school of Serbia, is occupied by some twenty papers; discussions about the representation of natural and social phenomena by mathematical means. He continually published them during his entire career as a professor and as a rule, in a desire to make them accessible to as many readers as possible, he prepared the majority of these papers in both Serbian and French versions. Petrović was inspired by natural phenomena, but always had in mind a very general science which encompassed all phenomena, natural and social, real and imaginary, including many phenomena in literature and art. He considered such science capable of becoming “a guiding principle in individual sciences” and capable of shedding a light on “great problem of natural philosophy, the solution of which is an ideal asymptotic goal of all sciences, which consists in the fact that all that has to be assumed in order to understand natural phenomena, as well as a certain number of propositions that encompass everything that occurs in nature, should be reduced to the least possible measure.”

Petrović began forming his viewpoint on the role of mathematics in phenomena of nature and the world at an age of the sudden blossoming of natural sciences, and at the same time the increasing presence of mathematics in them. Similarly to many philosophers and scientists at the time, he believed in the unlimited power of natural sciences, and thus of mathematics, given that mathematics played such an important role in their success. In terms of his education, Petrović was not only a mathematician, but also graduated in physics at the Sorbonne in 1893 and engaged in the study of chemistry and other sciences, so he had an opportunity to directly testify that mathematics permeates and connects science and contributes to its unity. He notices that in quite disparate areas of science, the same analytical apparatus appears, that “disparate phenomena” can be “analogous,” that is, represented by the same mathematics. “One of the most important such analogies […] exists among phenomena of electric current, heat transfer and the flow of fluids. It is so complete that these three kinds of phenomena, with their numerous and various variations, represent from an analytical point of view one and the same problem, the solution of which only needs to be interpreted in three different ways.” 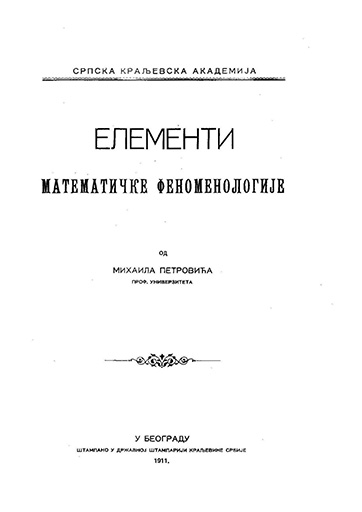 The front cover page of the book Elements of Mathematical Phenomenology, published in 1911. (Digital Legacy of Mihailo Petrović) 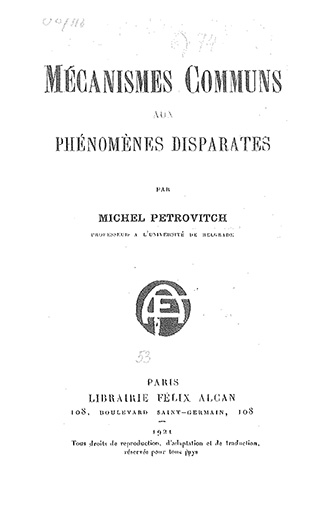 He maintained that mathematical analogies of natural phenomena is not accidental and tried to explain regularities and patterns. Autonomously and without following any predecessors, he gathered a huge body of material with great patience, and subsequently established a branch of science which he termed mathematical phenomenology. He defined the terminology of that science, which is similar to that of mathematics and in accordance with which groups of analogous phenomena can be determined “from which the mechanism of this or that phenomena could be extrapolated directly as the terms which figure in them assume this or that concrete meaning. A set of such analogies, once there is sufficient number of them, will make up a separate branch of natural philosophy, a kind of a general mechanics of causes which, just like other mathematical disciplines, in addition to its great general application, will work with a small number of general basic definitions.” Therefore the basic problem of phenomenology is “mathematical explication of particularities of disparate phenomena of all kinds and all concrete natures as necessary consequences of similarities of (their) mechanisms.” He introduced his theory in a voluminous work of around eight hundred pages, entitled The Elements of Mathematical Phenomenology, published in 1911. He believed that it could be truly fruitful in other disciplines as well, because it could help reconstruct the plausible mathematical models for natural and social phenomena. In order to cast phenomena into a mathematical form, he developed and elaborated a method of phenomenological referencing: when “the mechanism of the phenomena” is established, it is represented by a “figurative point” in a multidimensional space and then its mechanism mathematically described in a way mechanisms of phenomena are described in classical mechanics. He expounded this method in the monograph Phenomenological Copying (Fenomenološko preslikavanje) published in 1933. However, he did not stop at phenomena in nature and some phenomena in society, but also invested a great deal of effort to confirm the universality of his method in literature as well. The material he gathered for the accomplishment of this goal was published in 1967 in the book Metaphors and Allegories.

Natural sciences more or less aspire to base and present their research in the framework of some mathematical model. The more elaborate and perfected it seems, we consider its results more complete, reliable and ultimately closer to reality. It also applies to a great number of social sciences, the contemporary development of which greatly relies on the presence of mathematics. Mathematics is ubiquitous in science and the greater its presence, the more perfect the particular branch of science is considered to be. Science believes that every phenomena, everything that changes in the world, can be given an appropriate mathematical framework. The usefulness of such clothing can sometimes be nil, or it can even happen that this framework should generate a completely distorted image about some phenomena, but in the main, the advantages brought by mathematics are immeasurable. 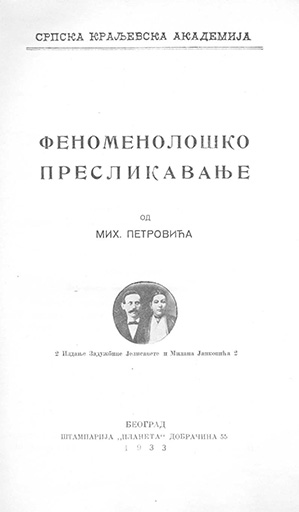 The front cover page of the book Phenomenological Transposition, published in 1933. (Digital Legacy of Mihailo Petrović) 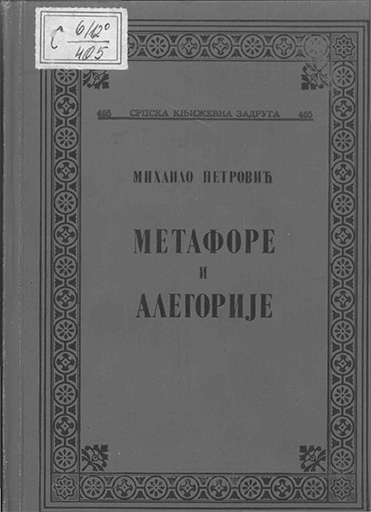 Mathematical representation of a phenomenon usually emerges quite independently of formal mathematics, in concrete individual endeavors by scientists to explain that phenomenon. With time, this representation is corrected through results in mathematics: already existing results and theories are used, or mathematics is implemented to obtain new results on its own and to develop new theories. Such a relationship between mathematics and other sciences has existed since antiquity and is a quite natural practice.

Petrović’s aspirations were to provide foundations for a science, which for each phenomenon could tailor an appropriate mathematical framework, as well as his faith that the entire world is structured according to unique mathematical laws, assumptions of which, that can precisely be determined, has still not found its confirmation in science. Contemporary logic has undoubtedly proved that every language, even the universal language of mathematics, has a limited expressive power. To the extent on which science today relies on mathematics, in which such limitations have been proven, naturally one has to face the limited power of science. No justification exists for its omnipotence. One could rather say that this power is insufficient for a comprehensive description of complex natural phenomena, that it is indeed possible in some ideal cases, but by no means can a complete description of the entirety of nature ever be provided. 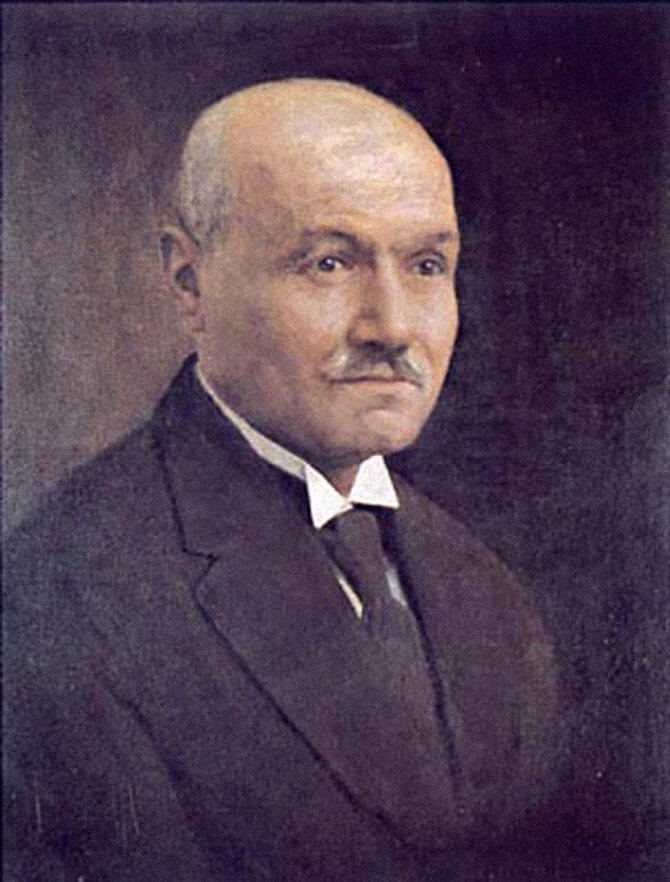 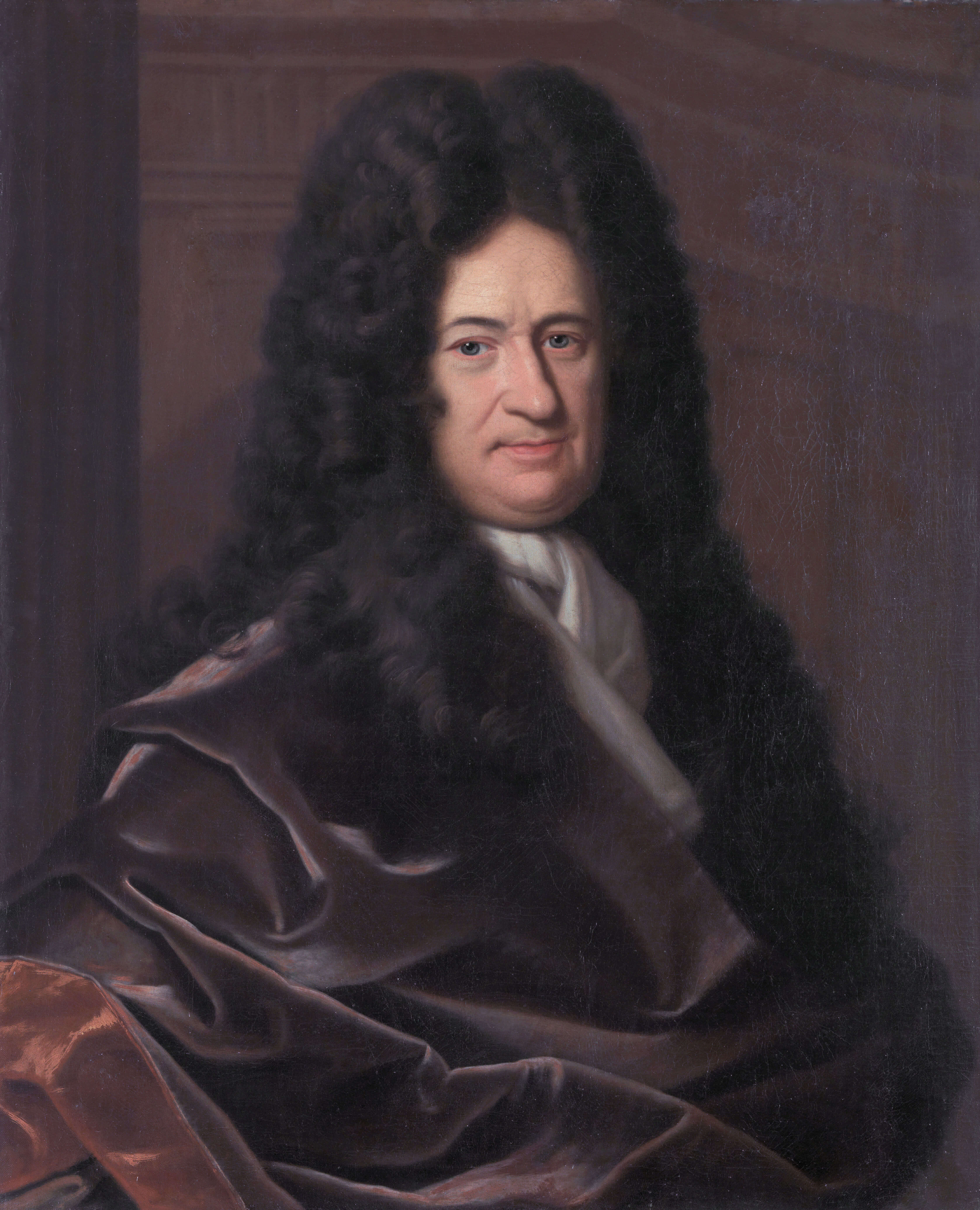 Mathematical phenomenology has to be understood as a separate project in the total opus of Mihailo Petrović. Philosophers and scientists often work on several independent projects, for a certain time only on one, and then shift to another, and often some of the projects remain unfinished. In parallel with working on mathematics and philosophy, Leibnitz worked his entire life simultaneously on four such projects: logic, ideal language, encyclopedia of knowledge and a general scientific method. They have all remained incomplete, and except for logic, the remaining three great projects by Leibnitz strikingly overlap and permeate with Petrović’s mathematical phenomenology. The ideal language is conceived as a universal symbolical language for science, mathematics and metaphysics, which would be “a basis of the calculation or the algebra of thinking,” and a kind of encyclopedia of knowledge was his systematic collection intended to enable realization of the project of the ideal language; while within the project of the general scientific method, Leibnitz tried to formulate a procedure for an accelerated expansion of knowledge. Unlike Leibnitz, who found the cornerstone of his grand project of commonality of science in logic, but not necessarily in the logic of his time, Petrović sought the foundation stone of his science in classical mechanics. To him logic seemed empty, and the relationship between the cause and the consequence too abstract, so he tried to formulate the notion of a cause in “concrete sciences” in which it “always appears inseparable from its substratum and its material nature.” He has given his notion of cause “a natural-science-like form” implying that the cause is “every phenomenon which aspires to change such a state of affairs or to introduce perturbation in some other phenomenon.” At the time when he was laying his groundwork for mathematical phenomenology, contemporary logic was in its infancy; so logic reduced to Aristotle’s teachings about the four types of categorical statements. He had every reason to turn his back on such logic; and ground mathematical phenomenology “closer to nature.” He made a conceptual apparatus that is not entirely articulated by “active causes” and “necessary consequences” and on which he built a kind of general mechanics of phenomena modeled on classical mechanics. It is entirely possible that Leibnitz’s and Petrović’s attempts to reinstate unity in science and knowledge have not yielded expected results for the same reasons: collision with Aristotelian logic. Petrović did not want to rely on that logic due to its perceived shallowness, but with this he also rejected contemporary logic and philosophy of mathematics. They had suddenly developed in parallel with his phenomenology, and perhaps could have been more useful to him. Leibnitz formulated the first contemporary logical systems and was the first to identify the significance of language for logic and science. Therefore it can be said he tried to realize his project with some of the tools of contemporary logic, whose godfather he had been, but his hands were tied by the scholastic legacy in logic from which he could not free himself. Therefore in the case of Petrović, equally as in the case of Leibnitz, the problem was that, at the time when they were beginning their project of description of all phenomena, mathematics did not have its own language. Neither had an existing language to use and build with. Searching for a language, Petrović finally relied in the end on the language of classical mechanics, the expressive power of which lags far behind the power exerted by contemporary language of mathematics. Leibnitz did try to establish such a language, but he did have problems with its inherent logical basis.

When Petrović began his project of mathematical phenomenology, the process of division of the existing branches of science, and the emergence of new disciplines, was in full swing. He considered that for the benefit of science this process should not go too far, and believed that this fragmentation of science could be counteracted, and its former unity restored. According to Petrović, mathematics ought to play a key role in that unification and become the main counterweight to the process of auto-fragmentation of science and knowledge in general. He was partially right in the sense that the language of mathematics, its syntax, created in the first years of the twentieth century in contemporary logic, has become the theoretical basis for the development of the syntax of programming languages, and has enabled the realization of contemporary digital computers; through which mathematics has openly invaded all sciences, and possibly created conditions for the resurrection of the idea of unity of science; the goal towards which Petrović so longingly aspired.